A Hayride Out of Ukraine

Pauline’s earliest memory of Ukraine was the clip-clop of horses hooves pulling a hay wagon that jostled to-and-fro as she lay hidden beneath a pile of straw. Warned not to move or utter a sound, the seven-year-old glimpsed moonlight through strands of straw.  Beside her lay her three-year-old brother, asleep from the motion and the late-night hour.

Pauline’s family had fled after sundown from her birthplace south of Kyiv, the Ukraine capital, traveling west to escape the Russian Civil War. Despite their haste, Pauline’s mother had pleaded that the wagon detour to her parents’ home in Boguslav. The next thing Pauline remembered was a gentle jerk as her papa pulled the reins. The wagon halted. From her hiding place in the hay, Pauline overheard her mother and grandparents’ last tearful goodbyes.  Then the wagon was on the move, across the damp forest floor toward a remote border crossing 265 miles away. There, her papa had been assured that sleepy customs guards would accept a bribe of a few zlotys and wave the hay wagon into Poland—then, as now, a safe place for Ukrainian refugees.

It was the summer of 1925, and Pauline’s papa—Louis Krutinski—was a wanted man.  As in centuries past and in years to come, Ukraine faced aggression from the Russian Bear. War was underway across the vast Russian Empire. The Bolsheviks had triumphed in 1917, executed Russia’s Romanov rulers in 1918, and stripped nobles of riches, peasants of horses, and farmers of food. Yet revolutionary factions still battled across Ukraine and Crimea.

The civil war had many sides: A Red Army of Socialists. A White Army that opposed the Reds. A Green Army of peasants. A Ukrainian National Army that wanted foreigners out. And partisans in the forests with allegiance to none of the above.

Periodically, Red Cavalry recruiters galloped into Pauline’s village and posted lists of local men to draft into the army. The first time recruiters arrived, Pauline’s papa paid a vagrant to take his place at the induction physical. The impersonator had rotten teeth, diseased enough to disqualify a man from military duty.  Months later, suspicious Red Cavalry recruiters again ordered her papa to report for a medical exam. His substitute was no longer in the vicinity. To pass himself off as his stand-in, Louis visited the town dentist the night before. The dentist, a fellow Jew, drilled and deconstructed Louis’s teeth to match the dentition on his military records.  The deception was successful. Louis was spared from military service, but not from pain. 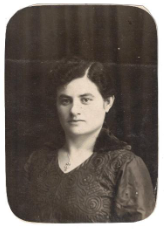 A year later, Louis again received notice that Red recruiters were returning. The Communist army, hemorrhaging from deaths and desertions, had lowered its standards and was conscripting any man who could carry a weapon. Soldiers drafted from Ukraine were dispatched to enemy lines thousands of miles away in Manchuria or Vladivostok.

Spared twice from military service, Louis realized it was time to leave. Forever. And fast.

Departing the rich black soil of Ukraine was sad and sentimental. Both Louis and his wife, Rose, were born south of Kyiv in the fertile dubbed the breadbasket of Europe. Rose Broslawski was born May 10, 1893, in Boguslav, a town of 12,500 where Jews had suffered repeated pogroms.  Louis was born March 10, 1881, in Zvenigarodka, a village nestled in an area of sunflowers and small farms.

The couple had met in Odessa, a Black Sea vacation resort—today under fire from Russian aircraft carriers in the Black Sea. On Christmas Day of 1917, a rabbi married them in Kharkiv—a cosmopolitan center now under Russian assault. The newlyweds set up house in Zvenigarodka, the village where Louis had sisters, brothers, nieces, nephews, aunts and uncles aplenty.

The Krutinski men had prospered as grain brokers. The tailored suits they wore and the professional family photos in their homes were testimonials to their success.

Eleven months after Louis and Rose married, their first child, a daughter, Pauline — called Peshka in Russian and Penina in Hebrew — was born Nov. 25, 1918.  Four years later a son, Bernard—called Beryl in Yiddish and named after a grandfather — arrived Dec. 25, 1922.  There was great rejoicing over the birth and the bris of a son to carry on the family name.  There was fear, as well. With the collapse of the Russian Empire and expansion of the Soviet Union, the Krutinski family’s stature and savings had diminished. Food was scarce, for the Soviets seized silos of Ukrainian grain to feed the Red Army.

Louis hoped to forge a fresh start 265 miles west in the independent Republic of Poland.  Or perhaps further west in America.

The Krutinski family of four rode in their hay wagon across Ukraine, traveling the backroads, always at night. Stalin’s guards were on the prowl for Ukrainian men evading military service. If caught, Louis might be shot on sight or deported to Siberia  It is likely the family stopped in Zhitomir and Shepatovka, cities with sizable Jewish populations, to rest their horses and replenish provisions.  Their final destination was Ostrog, a border town in Poland filled with refugees fleeing for their lives.  At the Horyn River border crossing, as predicted, a lone customs guard pocketed a handful of zlotys from Louis, and the hay wagon rolled into Poland.

Ostrog, unlike Boguslav or Zvenigarodka, had a flourishing Zionist presence. Its Jews were convinced their future lay in Palestine, the land of Israel that after World War I had passed from Turkish rule to British control. Ostrog’s Jews supported the Tarbut Movement, a network of coeducational schools where subjects from science and math to dance and agriculture were taught in Hebrew with a Zionist slant.

Pauline enrolled in kindergarten. She must have loved it because her class picture survives. The photo shows two teachers and seventeen children standing and seated outdoors. Pauline wears a big black bow in her hair and is the middle girl among three in the back row.   The Hebrew caption identifies her class as “Gan Yeladim,’” the kindergarten of the Tarbut school in Ostrog. 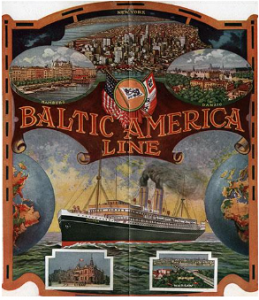 Ostrog had little paid work for refugees, particularly those without Polish identity papers. Louis, a short man with broad shoulders and muscular build, found parttime jobs outdoors as a woodsman and indoors as a baker. Rose, a skilled seamstress, mended clothes. But such piecework was hardly remunerative, not enough to save up for passage by ship to America. Third-class transatlantic fare cost $200 per adult and about half that for a child.

One day news reached Ostrog that the city hall in nearby Berezdiv, forty miles northeast,  had burned to the ground. Up in smoke went the town’s records and ledger books that listed births, marriages, and deaths. The city fathers announced a specific date for an administrative open house when clerks would re-issue identity documents to native sons and daughters.  Louis and Rose hitched their horse and wagon and left Ostrog at dawn, intent on declaring Berezdiv their place of birth. When they arrived, a line of people already stretched the length of the town.  They joked that the population had quadrupled overnight.  By sundown, Louis and Rose Krutinski had Polish identity papers stipulating that they were natives of Berezdiv, loyal to the Republic of Poland.  With these documents, the family received a Polish passport and began saving for passage to America.

FROM NEW YORK TO FORT WORTH

In the spring of 1928,  more than two years after fleeing Ukraine in a hay wagon, the Krutinskis boarded an ocean liner for a 17-day trip to Ellis Island. Once in New York, they shortened their surname to Kurtz, which was easier for Americans to pronounce and, coincidentally, means “short” in Yiddish and German.

Already conversant in Russian, Polish, and Yiddish, the couple rapidly picked up English and built a clientele. One day, as Louis and Rose walked home from work, they glanced at the buildings across the street.  On an upper story windowsill, they spotted a dentist’s shingle. It was the same dentist from Ukraine who in 1925 had destroyed Louis’s teeth and saved his life! In due time, the same dentist restored Louis’s teeth with gold.

In 1940, Pauline married an Army Reserve officer, Lt. Max Weiner, an attorney and native New Yorker whose parents had emigrated from Ukraine and Poland.  Max ultimately became a Federal government contract specialist and a business professor.  Pauline, whose childhood experiences  gave her empathy and warmth toward others, became executive secretary for the Salvation Army in Washington, DC.  The couple’s son, Bruce, my spouse and a children’s dentist, moved to Fort Worth in 1977 to set up his practice.  His parents visited Fort Worth once or twice a year, each time visiting the Amon Carter Museum of American Art. After Pauline, 78, died in 1997,  Max moved to Fort Worth, became active in Jewish War Veterans Post #733 and proudly flashed his Texas driver’s license. He died in 2003 at age 81. Both at his funeral service in Fort Worth and his burial at a Jewish cemetery in Washington, DC, a bugler played Taps.

(Hollace Ava Weiner is writing her family history, from which this account is excerpted.)