The First World War, touted as The War to End All Wars, had such massive casualties from lethal gas and aerial bombings that thousands who perished remain unnamed and unknown. After the armistice, a trend emerged to inscribe soldiers’ names on permanent rolls of honor made of stone and brass, lest they be forgotten.

Across the United States, civic, religious and alumni groups erected 99 doughboy honor rolls. Two are in Texas, according to the World War I Memorial Inventory Project. One honor roll is in Houston. The other is in Fort Worth, at the entrance to Congregation Ahavath Sholom.

The Tarrant County honor roll, unveiled Nov. 11, 1920, is a ten-foot-tall marble montage etched with the names of OUR BOYS—81 local Jewish men who served in uniform.  Topped with chiseled images of American flags and Stars of David, the monument expresses the ethnic pride and patriotism of the city’s small Jewish community, then numbering 2,250. 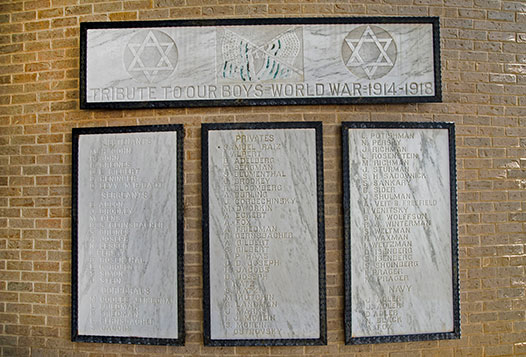 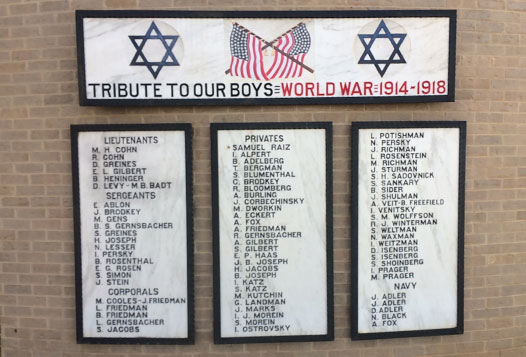 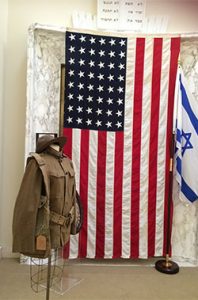 An enduring sentinel in stone, the honor roll serves as a solemn rebuke to the anti-Semitism and  Ku Klux Klan rhetoric that surfaced after the war. Among the 81 veterans listed on the wall, 22 were immigrants. The rest were first-generation and second-generation Americans.

The honor roll project was spearheaded by the Ladies Auxiliary to the Hebrew Institute, a building next door to Congregation Ahavath Sholom in the 800 block of Taylor St.  The Institute, with its gym, banquet hall, stage, and Talmud Torah school, was the hub of the Jewish community.

For thirty years, the impressive marble roster was embedded on a wall in the Hebrew Institute’s lobby.  Many a youngster sat on the marble bench in front of the honor roll reflecting on the soldiers’ familiar names.

Pvt. Ben Adelberg, a mechanic, had a talented son who went to Hollywood, shortened his name to Norm Alden, and became a character actor. Well-known locally was Cpl. Sam Sheinberg—whose last name is misspelled as Shoinberg on the honor roll. His western wear store outfitted popular bandleader Paul Whiteman. Two of the Greines brothers are on the honor roll: Lt. David and Sgt. Sol, both former North Side High School football stars.

Also listed is Pvt. Leo Potishman, son of a poor livery man. He became a grain broker and left his wealth to a foundation that supports the performing arts. His brother-in-law, Cpl. Harry B. Friedman, a building contractor, had a son, Bayard, who became mayor of Fort Worth.

Another familiar name is Sgt. Ephriam Rosen, namesake of an avenue on the North Side. His father, Sam Rosen, a Russian immigrant, was a real estate developer. The soldier’s mother, Betty Gordon Rosen, was founding president of the Ladies Auxiliary and the force behind creating the honor roll.

Betty Rosen and her board of directors initially gathered soldiers’ names through word of mouth. They publicized plans for the honor roll in the Nov. 21, 1919, issue of the weekly Jewish Monitor.  Their article listed 68 local veterans and gave readers a four-day deadline to submit additional names.

The auxiliary missed several soldiers—among them 2nd Lt. David Carb, who enlisted in 1915, two years before the U.S. entered the war. Carb fought with the French Foreign Legion and was awarded the Croix de Guerre.  Also absent from the stone tableau is Capt. David Goldberg, a Russian refugee who went to rabbinic school in America and became the Navy’s first Jewish chaplain. Despite these omissions, the marble honor roll demonstrates the optimism and energy  of a grassroots group celebrating America’s cultural pluralism. 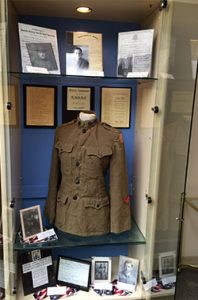 The OUR BOYS monument stood until 1951 when Ahavath Sholom moved its campus from Taylor St. to Eighth & Myrtle.  The honor roll was disassembled into four tablets, placed in storage, and forgotten.  In 1980, when the synagogue relocated to 4050 S. Hulen St., the WWI memorial was rediscovered.  Building chairman Al Sankary, whose father’s name is on the honor roll, arranged to frame and hang the tablets in a landscaped courtyard at the synagogue’s entrance.

With exposure to sun and rain, however, the dark ink highlighting each veteran’s name faded. After a decade outdoors, the marble monument was white-on-white, illegible to passersby. In 2017, as the centennial of America’s entry into The Great War approached, the synagogue’s landscaper, Robert Sumien, a military veteran of the Catholic faith, volunteered to restore the tablets and highlight, once again, the memory of those who served.