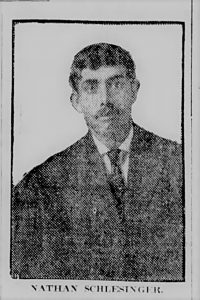 Myrna Bye wanted more details about the murder of her grandfather, an immigrant fruit peddler shot to death in 1911 on the Lewisville-Grapevine Road. The 111-year-old case was not only cold, it was frozen in time.  In her quest for details, the peddler’s granddaughter had first contacted me a decade ago.  Together, we had  researched coverage of the crime in microfilmed editions of the Star-Telegram.

This month, she was on the phone again from her home in Oregon, pleading, seemingly asking the impossible: “Can you find his picture? I want to see what my grandfather looked like.”

Nowadays, I subscribe to Newspapers.com, a digital service that scours libraries nationwide in search of out-of-print newspapers from days gone by.  Remarkably, when I typed in the peddler’s name—Nathan Schlessinger—and the month of the crime—December 1911—up popped coverage from a competing newspaper, the Fort Worth Record & Register. Although the Star-Telegram outlasted that defunct daily, the latter had far more detailed coverage—and a photograph of the victim.

Under the headline, “Youths Charged with Killing Hebrew Peddler,” was a picture of a well-groomed young man of 26 with dark wavy hair, a neatly-trimmed mustache and a coat and tie.

“I see a lot of my Dad in his face,” was the granddaughter’s reaction. “My Dad was very good looking, He died 20 years ago.”

According to news reports about the “dastardly attack,” the peddler, a father of two small children, had immigrated from Austria to New York in 1906, arrived in Texas around 1910, “spoke good English,” and had a weekly sales route. Every Wednesday he left Fort Worth on his horse and cart and traveled the dirt roads 35 miles to Lewisville and Grapevine, where his partner, Isaac Cohen, lived.   Late Saturday afternoon, when he sold out of apples, oranges and bananas, the peddler headed home to Fort Worth as the sun was setting.

On Dec. 16, 1911, two farm laborers, ages 16 and 20, conspired to hitch a ride on the fruit wagon, challenge the peddler to a game of poker, and abscond with his earnings.  As planned, the youths traveled in the wagon for five miles before “proposing” a card game. When Schlessinger declined, the older youth slammed him in the forehead with brass knuckles. The peddler jumped off the wagon, ran down the “desolate” dirt  road begging for his life, and fell to the earth when the older youth fired three shots from a Colt 41 revolver.  The duo turned the peddler’s pockets inside out, found a “cloth bag” filled with $3.50 in silver coins and fled.

Dusk was falling.  Two farmers heard the gunshots. One of them found the “driverless horse” wandering in the road.  An armed posse on horseback quickly organized. With bloodhounds, they discovered the body at daylight and followed the suspects’ tracks to a dwelling. The boys were jailed in Denton County until investigators determined the “killing took place one mile inside the Tarrant County line.”  Within days, the defendants were behind bars in Fort Worth.

The peddler’s body was transported to Weatherford Street and the Gause funeral parlor—the oldest in the city, dating to 1879. Undertaker George L. Gause reported that as the body was cleansed, a wallet with $15 was found “hidden inside an interior pocket in the trousers.” The currency and the corpse, wrapped in a white linen sheet, were taken to the peddler’s humble “cottage” at 620 E. First Street—today the site of a three-bedroom, four-bath condominium. “The wail of the bereaved” was heard on the street. In “hushed tones,” several hundred  people paid condolences to the widow.

The Jewish community raised money for the peddler’s burial, conducted Dec. 16  by Rabbi Charles Blumenthal at Ahavath Sholom Cemetery, 400 N. University Dr.  Additional donations paid for an attorney to assist the prosecution and a four-foot tombstone on which the peddler’s surname is misspelled and the date of burial, rather than the date of his death, is inscribed.  The widow moved to upstate New York where she had relatives. She remarried a man who died in 1920 during the influenza pandemic.

In Fort Worth, the gunman went on trial five weeks after the murder.   Because the city  was under quarantine for an outbreak of meningitis, there were calls to postpone the proceedings. But Judge James W. Swayne of the 17th District Court  pushed for a speedy trial. He  ordered the Courthouse sprayed with disinfectant, all carpets removed, and the trial to begin Jan. 22.

When the jury sentenced the gunman to life in prison, the judge told the defendant he  “should have been hanged.”  He scolded jurors for sparing the murderer’s life simply because the gunman’s parents were well respected in Lewisville.  Ultimately, the guilty man was paroled, married in 1949, had a son, and died in 1958.

His 16-year-old accomplice was tried separately and pleaded insanity. After his trial ended in a hung jury, the prosecution dismissed the charges.

The peddler’s murder, a premeditated crime of opportunity, was an act of violence with lasting impact.  It continues to haunt the granddaughter he never met.  The homicide upended lives. Like so many crimes,  its impact and circumstances have parallels to the present.

(Hollace Ava Weiner, an author and historian, is director of the Fort Worth Jewish Archives.)