Red Goose Landmark Proves to be a Nest Egg 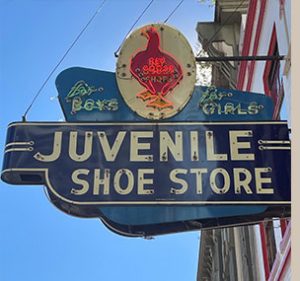 Shoehorned in the middle of a downtown block with trendy Reata Restaurant and a vacant Uno Pizzeria is a vintage neon sign that hawks Red Goose Shoes, a brand of footwear once coveted by kids.  Shoes are no longer for sale at 306 N. Houston Street. Yet there’s plenty of nostalgia inside the 118-year-old  landmark,  a veritable nest egg for its longtime owners and for the leaseholder who two decades ago converted the premises into the Red Goose Saloon.

Most every day and night, passersby snap pictures of the colorful outdoor sign that overhangs   the sidewalk. It depicts a red-feathered Mother Goose advertising shoes “for boys” and “for girls.” A picture of the sign is in the Library of  Congress’s “Roadside America” photograph archive.   Historic preservation websites single out the building, with its display windows  that jut toward the sidewalk. Pedestrians gaze down at the tiny black-and-white entry tiles that spell “Juvenile Shoe Store.”

The two-story commercial structure, with its scarlet window frames and white-painted brick is the only privately owned, unrefurbished building on this stretch of Houston Street.  Thirty years ago its owners, the Solomon family, balked at selling to Sundance Square, the 13-square blocks of downtown real estate that underwent private redevelopment in the 1980s and 1990s. The shoe store was the sole holdout on the block.

“We were unable to reach a price both sides were comfortable with,” former Sundance General Manager Bill Boecker told the Star-Telegram in 1991. “So we designed around it. It’s a wonderful little building. It’s a piece of history there.”

Appraised 30 years ago at $121,000, the narrow, 4,600 square-foot Red Goose building is now valued by the Tarrant Appraisal District at $550,400. Because the structure has local landmark status, if the owner rehabilitates the space, it would be eligible for a Historic Tax Site Exemption, freezing city property taxes for a decade at pre-renovation levels.

Constructed in 1903, the commercial building was initially a furniture store, then a harness shop before Julius and Selma Solomon bought it in 1935 and turned the premises into a children’s shoe emporium.  Downtown was then a footwear hub. At one time, 17 different stores carried footwear, from the cowboy boots at Luskey’s Western Wear to the high-topped button shoes that the Solomons sold.

The Red Goose Co. of St. Louis, Missouri, dates to 1869 and was originally called Gieseke-D’oench-Hayes after its three founders. Their names were too much of a mouthful for the advertising age. Since Gieseke sounds like German or Yiddish slang for goose, a name change came in the early 1900s when a goose was imprinted on shoe cartons. Stock boys having fun painted the geese red. The manufacturers liked that and trademarked Red Goose Shoes in 1906.  The heyday of the brand arrived with television when child actors promoted Red Goose Shoes on Saturday-morning kiddie shows.

By that time, Julius and Selma Solomon’s sons, Manny and Leroy, had taken over the family business.  Throughout the 1940s and 1950s, children’s feet were x-rayed to insure a proper fit. “It was kind of a novelty,”  said local historian Dalton Hoffman, 78, who recalls trying on brown oxfords at Solomons Shoes. Before his parents paid for a pair of new shoes, he slid each foot into a wooden box, called a foot-fitting fluoroscope. “There was a big red button to push, . . .  a screen on top of the machine, and you could see the bones and the joints. You could see not only that the shoe fit but that you had room to grow.”

The novelty wore off in the late-1950s when health authorities warned about exposing kids and clerks to excess radiation.  Fluoroscopes moved from shoe stores into museums.

After the Solomon brothers retired at the end of 1991, Leroy’s spouse Rhoda, a Realtor, leased the family’s Houston Street property to a group of Stockyards entrepreneurs. They turned it into a western-themed bar and grill that sold souvenirs  and apparel. In 1993 they commissioned Stylle Read, a western artist with a star on the Texas Trail of Fame, to cover the walls on the ground floor with vintage ads for  Davy Crockett Cigars, Lariat Flour, Pan-Handle Wheat Flour and Miller High Life.

A new proprietor arrived in 1999.   Chris Hutchinson, 49, a Trinity Valley graduate with an economics degree and a thirst for the bar business, reopened the premises as the Red Goose Saloon. Raised in Texas,  he felt at home with the pressed-tin ceiling, the dark, hardwood floors and the thick oak banister leading to the upper level. He constructed a stage for live music on each floor.  The upstairs,  formerly a storage area for thousands of pairs of shoes, now features burlesque revues, karaoke, magic shows and more.

“We never had to market,” Hutchinson said.  Downtown conventions list the Red Goose Saloon among places for out-of-towners to drop in for a beer and a burger.  The Red Goose has become a neighborhood pub where service employees wearing hotel uniforms gather for a drink after work.

Last February’s extended deep freeze led to burst pipes and interior damage at the Red Goose. Repair work is ongoing. The building has outlasted the Red Goose Shoe label.  After multiple mergers within the shoe industry during the 1950s and 1960s, manufacturers dropped the brand.

(Hollace Ava Weiner, an author, archivist, and historian, is director of the Fort Worth Jewish Archives.)