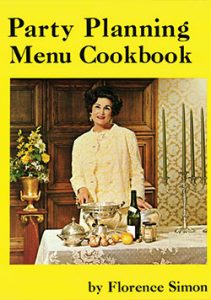 When New York native Florence Meltzer Simon, a dental assistant and parttime fashion model,  married and moved to Fort Worth in 1944, she found herself in a culinary desert. A fancy dinner meant throwing a steak on the grill.  Chicken-fried steak was a staple, but chicken Kiev, virtually unknown.

A newlywed with time on her hands, Simon started reading Gourmet magazine, growing fresh herbs, and cooking with wine.  She asked the butcher at Buddies to carve special cuts of beef, lamb, and pork. Then she developed recipes, entertainment ideas, and “tips and tricks” for making Mushroom-Butter Canapes, “never-fail  pastry dough,” and New Orleans Bloody Marys. (“Shake with cracked ice,” was her advice).

In 1967, she opened the Florence Simon Gourmet Cooking School, with classes in her Westcliff  kitchen on Manderly Place.  Soon she had a waiting list of Westside women eager to learn. (She taught men-only classes, too.)

Some of her wealthiest clients enrolled their African American and Latina housekeepers.   “Mother’s cooking classes may have been the first interracial cooking school in Texas,” remarked her son Bill, a Dallas writer.

Among Simon’s earliest disciples were Louise Lamensdorf, Elizabeth McCall and Renie Steves,  cofounders of Fort Worth’s French Apron School of Cooking which operated from 1979 to 1988.  Steves went on to become an international food writer, critic, teacher, and consultant.   Lamensdorf, who opened the acclaimed Bistro Louise in 1996, recalled, “Florence had ambitious recipes—like risottos—unique for the time.”

Florence Simon also propelled the culinary career of Paula Lambert, the Dallas cookbook author who in 1982 launched the Mozzarella Co. “Her recipes were a foundation for me,”  said Lambert who grew up in Fort Worth.  “She was definitely ahead of the times with her knowledge of international foods.”

Following each class, Simon spread on her dining room table an array of French cookware designed for quiches, pates, crepes, and souffles.  The specialty pans, unavailable Texas stores, came from import firms in New York. Simon sold the cookware through a division of her school dubbed Boutique Culinaire.

“I still have the crepe pans that my mother bought for me. In fact, I used them last week,” said Lambert, who was a high school student at Arlington Heights when she and her mother, Liz Stephens, enrolled in the Florence Simon Gourmet Cooking School.  “She taught us how to entertain using her recipes .”

Simon insisted that the seeds of her success sprang from the Bon Vivant Gourmet Club, a section of the Fort Worth Woman’s Club.  How flattered she was in 1959 when appointed advisor to the club’s Culinary Arts Department—which she considered a rare honor for a Jewish woman.  She celebrated in the spring of 1962 with a dinner at her home for 100 clubwomen, replete with floral arrangements from her garden.

Six months later, prominent piano teacher Grace Ward Lankford recruited Simon for the first Van Cliburn International Piano Competition. Simon supervised catering in the Green Room, where jurors, who hailed from 19 countries,  snacked twice a day on hors d’oeuvres.  She lined up 30 eager hostesses to assist, became a close friend of Van Cliburn and his mother, Rildia Bee, and served on the contest board for three decades.

“My career is zooming,” she wrote in her 1971 holiday newsletter, with appearances on Texas TV stations, a three-day cooking seminar for Continental National Bank’s wealthiest depositors, and a class for 100 people in the Lone Star Gas Co. auditorium.

She began writing a cookbook organized around themed brunches, luncheons, and dinners—for example Mediterranean Lunches, Chinese Szechwan-Shrimp Dinners and  “Thanksgiving with a Difference.” Each menu came replete with recipes, drawings of whisks and whimsical mushrooms, plus hints, such as how to transform “curdled” Hollandaise into a “smooth and satiny” sauce.

In 1973, Simon was miffed when one of her students self-published a cookbook with a similar menu format.  (“Yes, that happens,” commented Lamensdorf.)  The student’s book, Mother Janes’ Prescriptions for Hunger, was by Jane Justin, whose spouse was CEO of the cowboy-boot company. Justin’s cookbook had a section on mealtime menus, but the recipes were for down-home Southern cooking, not gourmet fare.

Simon’s 106-page Party Planning Menu Cookbook, self-published in 1975, was more successful than she’d expected. It sold 1,000 copies in its first two weeks and led to a multi-state tour, demonstrations at conventions and taping a show for the Dairy Council of America. International travel followed. In London and Paris, she took classes at  Le Cordon Bleu. In France, she spent an afternoon in the kitchen with Simone Beck, the cooking partner of Julia Child.

Crossing the Atlantic on the Queen Elizabeth 2, she met a food consultant for the United Nations. He nominated her for the international gourmet society Chaine des Rotisseurs. During the induction ceremony at the Fort Worth Club, she was knighted with a silver sword and dubbed “Dame Simon.”

“Florence lifted the level of culinary progress in Fort Worth,” said Lamensdorf, who still savors the original mimeographed recipes Simon distributed during her cooking classes.  When Florence Simon died in 2001 at age 89, the funeral at Beth-El Congregation was followed with a  gourmet reception, which Lamensdorf catered using her mentor’s original recipes.

(Hollace Weiner, a former Star-Telegram reporter, is an author, archivist, and director of the Fort Worth Jewish Archives.)